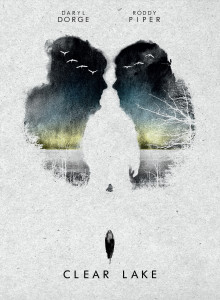 Wild Sound is very proud to announce the release of our first ever folk film – Clear Lake – which is available to buy on DVD on Amazon.co.uk from today.

Nothing could please Winnipeg-born director Mick Paulusma more. But this journey has been full of surprises. When Mick was planning to shoot back in 2007, he couldn’t have imagined that his first feature would star his hero – the WWF wrestling phenomenon ‘Rowdy’ Roddy Piper.

But that’s exactly what happened for the first-time director who asked the right question at the right time. “Rod was always my first choice. I imagined this character, being played by an incredibly physically strong man for whom a wheelchair would have little impact – Rod was the perfect choice.”

Paulusma picked up the phone and dialed Los Angeles – he found Piper’s agent and sent her the script. “I didn’t really expect Rod to even see it, if I’m honest,” confesses Paulusma looking back. “I nearly fell on the floor when he rang to say he’d do it. It was a dream come true.”

Now Paulusma is making the fruits of his labour available to purchase on DVD for Piper fans for the first time, after Clear Lake has streamed online and been broadcast on Canadian TV.

Clear Lake tells the story of Jimmy (played by Winnipeg’s Daryl Dorge), a young man who gets a second chance to fulfil his childhood dream to see the awesome snow goose migration across a fictional Clear Lake. Piper plays his father, a man trying to get past the death of his wife. A tight-knit family drama, Clear Lake was nominated for Best Feature at The Great Lakes Festival in 2011.

Paulusma, who now lives in the UK, returned to Winnipeg to shoot Clear Lake on a super-low budget in 2008. He explains, “We couldn’t have made the film without the generosity of the city”.

It’s been a while coming because of family dramas of his own: a baby, three house moves and an editor’s very sick child meant the project took its time. “It’s been a labour of love,” says Paulusma, “but I always knew it was going to be worth it.”