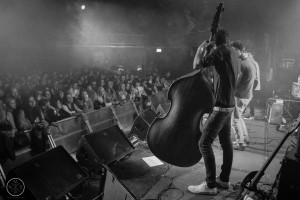 Mortal Tides are Noah Bevington (lead singer, guitar), Jed Bevington (backing vocals, fiddle, piano), George Brignal (drums) and Fergus Quill (double bass). When they recorded their first EP in 2013, they were all aged between 14-16; they are all at school, between Saffron Walden County High School and Hills Road Sixth Form College in Cambridge.

They write and record their extraordinarily precocious songs in The Bothy, an ancient outhouse behind their country home near Saffron Walden, Essex. You can almost hear the beams of the place creak in ‘Houses and Drums’, the EP’s stunning opening track.

Formerly known as From The Woods, the band is growing a swelling young fanbase thanks to a series of packed all-ages gigs at Cambridge’s Junction and brilliant radio show appearances on local radio station StarFM.  All under 18, hugely promising careers stretch before them.