Harry Harris will be on tour in Ireland from 10-17 June playing a string of shows — make sure you catch him and spread the word!

Harry’s an incredible force live, a true storyteller in his lyrics and the kind of muscular guitarist who makes you want to go home and write a song of your own.

He’ll be playing Dublin, Dundalk, Derry, Galway, Dingle and Clonakilty as part of his tour of The Emerald Isle, and he’s touring with Anna McIvor, whose beautiful voice appears on his stunning album ‘Songs About Other People’ which came out in January. 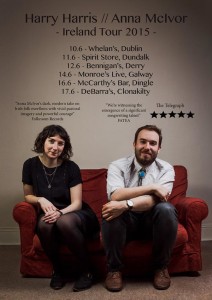