“a remarkable talent…
Her voice is a bell, a curve of pliant sound,
a personality, a vessel for great songs” — PopMatters

Already an established voice on the jazz circuit, Nicky Schrire comes over to the folk side with this dazzling, self-produced folk EP of 5 urbane and highly-crafted songs.

Nicky Schrire – Born in London, raised in South Africa, five years in New York, and now returned to her birthplace, Nicky Schrire has created a highly personal travelogue with this 5-track EP. 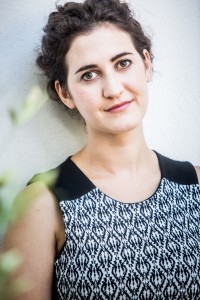 This is Schrire’s first foray into the singer-songwriter mode after three jazz releases. The daughter of a classicist mother and a folkie father, Schrire’s first love was jazz but, as far back as her debut album ‘Freedom Flight’ — which ‘All About Jazz’ named one of the best albums of 2012 — Schrire was displaying a penchant for combining jazz and acoustic styles.

“What I love most about jazz isn’t a swinging groove or a bebop head – it’s the improvisatory nature of the music and the taking of chances, particularly when you’re collaborating and connecting with other musicians. But what I love most about folk music, is the narrative. The stories that get told.”

Touring North America, South Africa, the UK and Ireland as a jazz musician, she realised her creative focus was shifting towards the folk tradition of telling stories, rather than compositions overflowing with jazz complexities. Encouraged by US critics comparing her to Joni Mitchell, Joan Baez and Mary Chapin Carpenter, she bought a guitar, left New York, and spent two months in Cape Town writing new songs and teaching herself how to play. She focused on weaving her nomadic experiences into her music — “I’ve moved home several times,” Schrire says with a smile, “but leaving New York was such a liberating change that the process of writing and recording this EP ended up feeling necessary — and cathartic.”

Schrire arranged all the songs for ‘An Education’ to be played with ’cellist and childhood friend Ariella Caira, then helmed the one-day recording session at Cape Town’s Digital Forest Studio. The result is a stunning collection of songs infused with a feeling of liberation from the density of jazz, and a real acoustic clarity.