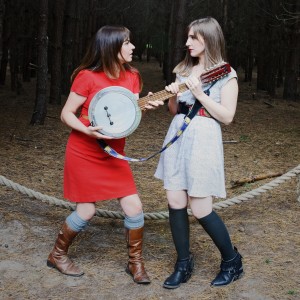 he Pollyanna Band is a collaboration between two established singer-songwriters: Polly Paulusma and Annie Dressner.

The single “Silent Night”, their first release, showcases the blend of their unique voices, whose harmonies create a warm bluegrass sound like no other.

Their individual achievements to date are noteworthy: signed to Bjork’s One Little Indian label for six years, Paulusma released two studio albums and supported Bob Dylan, Coldplay, toured the US supporting The Divine Comedy, and played Glastonbury, T in the Park and V Festival. Dressner moved to the UK from New York City in 2011 and, since then, has grown a large fan-base around two indie releases. She has toured tirelessly up and down the country and played Green Man Festival, the Secret Garden Party and Cambridge Folk Festival, where the two musicians first met. They have both had songs played on BBC Radio 2, BBC 6Music and UK Folk Radio, among others, and their followers – over 5,000 between them on FB and Twitter – await this new release with eager anticipation.

They didn’t realise how close they lived to each other when they met; being near-neighbours by chance in the beautiful university town of Cambridge “makes co-writing as easy as borrowing a cup of sugar”, says Dressner. “We spend half our time in my shed writing, and the other half laughing”, says Paulusma.

“Silent Night” is a double-A side: track 1 is the bluegrass-styled “Silent Night”, while track 2 is an original composition, “Feel Like Christmas All The Time”. Both tracks are mixed by Dave Moore.