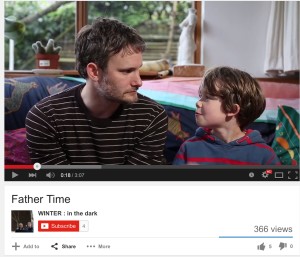 W I N T E R are brothers Matt and Joe Winter, who have been singing and playing guitars together their whole lives. After the disbanding of their last group they moved 200 kilometres apart and tried to build new lives. They soon discovered that this was not possible; they could not live without music.

The stunning inter-generational video for ‘Father Time’, directed by Laurence Topham, remains in keeping with the band’s family ethos and was filmed in various family homes.

From different sides of the country these brothers write in parallel; despite their unconventional working methods — enforced by distance, constrained by time — they tell the same stories about feeling left behind and out of time, about where the discarded and forgotten bits of our selves might end up, about the biggest truths.

In 2013 W I N T E R went into the studio.with producer Brett Shaw (Florence and The Machine, Swim Deep, Daughter, Eliza Doolittle), and recorded the sessions which were to become ‘In The Dark’. This single ‘Father Time’ is the first taste of the extraordinary album to come.