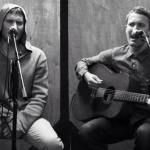 W I N T E R are brothers Matt and Joe Winter, who have been singing and playing guitars together their whole lives. After the disbanding of their last group they moved 200 kilometres apart and tried to build new lives. They soon discovered that this was not possible; they could not live without music.

From different sides of the country they wrote in parallel: Joe singing spontaneously into his Dictaphone whilst in transit; Matt re-immersing himself in  the music of their childhood — Simon & Garfunkel, Big Star, Smokey Robinson, Elliot Smith, The Coral – developing his own half-formed pop songs. He then melded these to the vocal fragments he received down the wire from his brother. Despite their unconventional working method – enforced by distance, constrained by time – they realised they were telling the same stories about feeling left behind and out of time, about where the discarded and forgotten bits of our selves might end up, about the biggest truths.

In 2013 W I N T E R went into the studio. Spurred on by debut albums from Villagers, King Creosote & Jon Hopkins and Tune-Yards, they recorded six sessions with producer Brett Shaw (credits include Florence and The Machine, Swim Deep, Daughter, Eliza Doolittle), sessions which became ‘In The Dark’. In spring 2014, album track ‘The Sea Bites Back’ was released as a introductory single through London indie label Infinite Jest. The track received national airplay on BBC 6Music,  was included in Q Magazine’s ‘Five Songs to Hear This Week’ and was also made ‘Song of the Day’ on For Folks Sake. Billy Bragg made the track one of his ‘records of the year so far’ on his Amazing Radio show with Gary Crowley. In keeping with the family ethos, the artwork is by Joe’s wife, professional artist Kate Winter.